Should esports be included in upcoming Olympic Games? 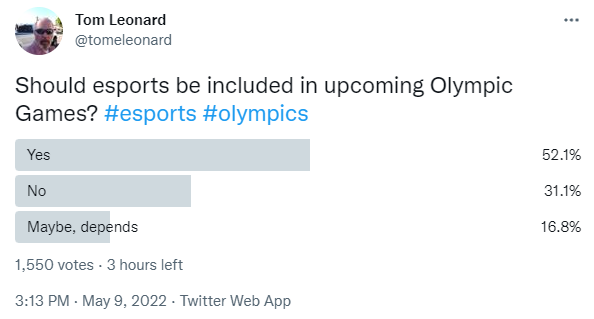 There is always a lot of discussion about esports and the Olympic Games. I was curious, so I posted a poll on Twitter to ask if people thought this would be a good idea.

Here are the results.

I will be the first to admit that there is nothing scientific about polling on Twitter. But after 1,550 votes it seems that just over half of the respondents agreed that esports should be included in upcoming Olympic Games. Only 31% said no and almost 17% said maybe.

The audience for these responses were primarily outside of the US, more male than female, younger (not a surprise) under 35, and two thirds on Android vs. IOS.

My main takeaway is that there seems to be a lot of interest in including esports as part of Olympic events. There are many video games that would seem to fit well, and some that wouldn’t be a good fit. But that is not for me to decide.

Perhaps I should have done the poll here on LinkedIn to see if the response would be different. Another time.

Do you think that the Olympics should include esports?